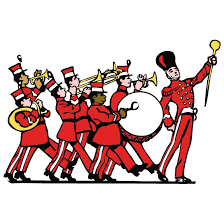 The SGS Marching Raiders began their day marching in the Homecoming parade Saturday, September 15.  They then participated in the Mass Band performance at the high school.  All three feeder schools were represented – Mazon Middle, Milton Pope Elementary, and Seneca Grade Schools.  The 7th & 8th graders learned three marching band arrangements “My Generation”, “Don’t Stop Believin’” & “Go Your Own Way” and performed them with the Marching Irish at half time.  It was a fun day!!