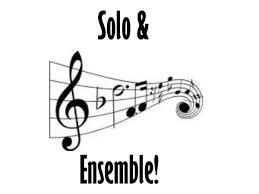 The following is a list of the students who participated in solos and ensembles: